Welcome to a special day: LEAP DAY. This extra day in February that comes only once every four years (give or take) is considered extremely special in culture, superstition, legality, and literature – and stories such as The Pirates of Penzance would literally not be able to exist without it.

(Funny trivia that came up in my research: Superman’s birthday – but not Clark Kent’s – is officially considered to be February 29.) 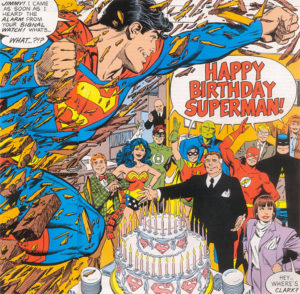 When it comes to the legal system domestically and internationally, special rules apply: the recognition of adulthood (typically your 18th birthday) and driver’s license expirations occur either on subsequent February 28ths or March 1sts, depending on your country of residence.

What does Leap Day have to do with me? Well, weddings are a big part of my business, and believe it or not this day has special significance in some cultures, particularly across the pond in the United Kingdom and surrounding areas.

There’s a popular tradition known as Bachelor’s Day in some countries that allows – or outright encourages – a woman to propose marriage to a man on February 29. If the man refuses, he then is obliged to give the woman money or buy her a dress. In upper-class societies in Europe, if the man refuses marriage, he then must purchase 12 pairs of gloves for the woman, suggesting that the gloves are to hide the woman’s embarrassment of not having an engagement ring. In Ireland, the tradition is supposed to originate from a deal that Saint Bridget struck with Saint Patrick.

Meanwhile, a mere Mediterranean Ocean away, in Greece, it is considered unlucky to marry on a leap day. Personally, I think they need to get over this particular superstition: if makes it a lot easier on the man in the relationship to remember anniversaries. Genderist? Perhaps. But true? Absolutely.

Domestically, one town in particular has an interesting twist: in Aurora, Illinois, single women are deputized and may arrest single men, subject to a four-dollar fine, every February 29. To me, this is Sadie Hawkins run amok!

Why else is this day important to me? Because I’ve selected this leap year of 2020 to take a large leap of faith when it comes to my professional life and career. I’ve spent the past numerous months getting some business ducks in a row, and if you haven’t caught it yet, check out my completely redesigned website and upgraded services. When I first started, I wasn’t entirely clear in my head what I wanted to offer as the Singing Seamstress. In time, I learned there’s a danger in offering a little bit of everything – the phrase Jack of All Trades pops into mind. By tightening my service menu, I’m able to ensure more personalized detail to my clients in a more intimate setting. The last thing I want is anyone one hires to me to feel they’re in an assembly line, or merely a number in my appointment book.

So celebrate with me in raising a glass in celebration to this year so far – where, I’m so proud to announce, I’ve been named to The Knot’s Best of the Year for the third year in a row. As we slide into March and the upcoming spring and bridal season, I’d love to hear from you: What are YOUR leaps you’ll be taking this year?