A few months ago, I talked about traditional wedding colors in other cultures. Now, with it being Valentine’s Day, I was inspired to pick one color – red – and give you my musings on it.

The relationship between crimson and love is age old for obvious reasons – the color signifies the color of the heart. And blood. Rubies (the ‘blood stones’) are the gem designated as talismans that promote love, lust, and fire. Early medieval paintings tended to depict Christ and the Virgin Mary as wearing red clothing to drive home the point of blood and sacrifice.

Outside of our own borders, red is considered a lucky color. Particularly in China; and – incidentally – we’re currently in the Chinese New Year season. For the Chinese, red is supposed to repel evil spirits and bad fortune. Interestingly, we in the West tend to use lots of reds in marketing and ad campaigns that cater to the Chinese, but a little study into the matter would let us know that’s considered bad taste. Red isn’t used every day by far in Chinese couture. I guess it would be akin to Chinese (or Russians or Lilliputians) basing their own perceptions of American fashion purely on the colors of red, white, and blue. Long story short? If you’re putting together an outfit of cultural significance, know that culture’s thoughts on colors. 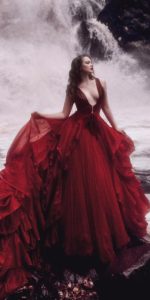 The cliché of red clothing extends far back into time. Today, there is something actually called the ‘Red Dress Effect’ – a hotly debated postulation that people look more attractive or more sensual when wearing that color. Two opposing studies have clashed on the topic, leaving us with no real idea if it’s actually true or not. But – 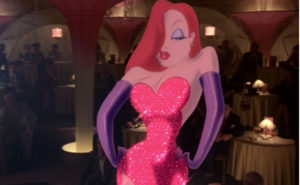 backed up by science or not – the cliché is still there: red dresses equal vamps. Some of the most iconic dresses in cinematic history have been red. Think of Marilyn Monroe in Gentlemen Prefer Blondes, Audrey Hepburn in Funny Face, Vivien Leigh in not one but two red dresses in Gone With the Wind (frankly, Scarlett…), Bridget Bardot in more than one movie… heck, even Jessica Rabbit. Red across the board, and all in sexpot roles.

Looking back through time, this ‘red equals sex’ probably first reared its ugly head in the Christian Bible – testaments both old and new. Sins were described as ‘scarlet’ in the OT book of Isaiah. Meanwhile, in the last few pages of the NT, the book of Revelation described the Antichrist as a red monster being ridden by a women dressed in scarlet. The woman being – you guessed it – the Whore of Babylon. For some reason, in my humble opinion, way back in the day, red got a raw deal.

Where does that leave us today? To me, red is a thrilling color. It represents vitality, and spirit, and passion… and Santa. Sure, crimson isn’t for every occasion or every person, but I personally find it an amazing color to work with, whether I’m assisting someone in their cosplay ventures, cultural wedding couture, or Santa wishes. 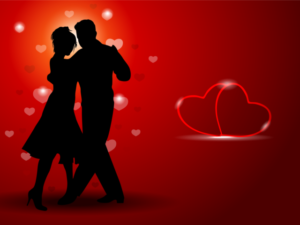 All that being said, I want to wish you all a happy Valentine’s Day. (And, to further drive home the themes of love and blood and sacrifice during this day, read about what eventually happened to the poor guy this day is named after!) I think I may start a theme, and touch on the color green next month… and maybe flag colors for July and orange for October and…

Well, that’s enough from me for now… what are YOUR thoughts on red?