As a girl growing up, I had a singular problem with the whole Superman/Lois Lane relationship dynamic. According to the official story, Clark Kent never told Lois – nor Jimmy Olsen nor anyone else outside his immediate family – that he was really the Man of Steel because he was afraid they’d be targeted. 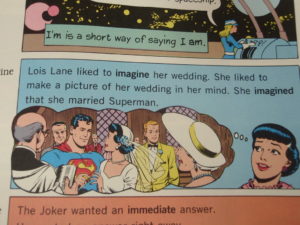 Sure, I can give points for caring, but in reality every other issue of the comic book dealt with Lois being kidnapped to lure her hero into a trap because she was “Superman’s Girlfriend.” Whether or not she knew Superman’s secret identity, she was “part of the family” and prime pickings for Lex Luthor’s evil plans.

(And to the comic nerds who follow me and my musings: Yes, yes, I know, the writers of the Superman mythos finally “evolved” their story so where she now knows. But I’m a traditionalist.)

Personally, I think he never told her because he couldn’t trust her to keep her trap shut.

Now, I find myself in that exact same predicament. Because I’m privy to a secret that rivals the knowledge of Superman’s identity itself. Cue the music! Look up in the sky! It’s a bird… it’s a plane… It’s… It’s…

That’s right, I’m part of the inner circle who knows the identity of the NFL team Houston Texans’ mascot. 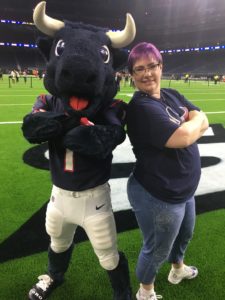 How did I get to enjoy such a treasured secret? Simple. Because I had the honor of being selected by Toro’s human counterpart (let’s call him “Clark”) and his lovely woman to create his wedding tuxedo and perform alterations on her wedding gown for their recent nuptials. 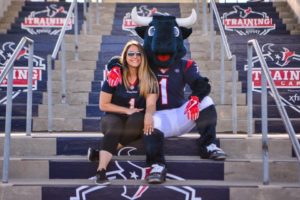 Now, I can’t tell you how much I want to splash the wedding photos all over the interwebs, but I’ve been sworn to strict secrecy, and this is a charge I take to heart. Sure, being known as the official seamstress of Toro’s Wedding could give me some amazing street cred, but it would go against the explicit and implicit wishes of my clients, and that’s something I simply cannot do.

What I CAN tell you is that both “Clark” and his lovely bride are amazing, friendly people; honest, engaging, and honorable, just like you’d like your superhero and his gal to be. If you want proof, just check out this wedding photo courteously provided by Magek Photography showing Toro brightening people’s lives at SOMEONE ELSE’S wedding. He treasures the value of his fans and likes to give back to the community as best as he can.

And that’s no bull.