You’ll have to pardon the puns, but I’m so excited that I’m bursting at the seams. I’m just now sewing up an admittedly formidable task that’s been leaving me in stitches.

Why am I so excited? Because it appears that my small business is evolving into the next step. For years, I’ve worked on costumes for Santas. I’ve relatively recently been working on more – shall we say – ‘corporate’ gigs (like my work for Toro, the official mascot of the Houston Texans NFL team). But now, I’ve gotten to merge the two!

A little history. A few years back, I was commissioned to create an upscale Santa costume for a wonderful man named Steve Fletcher, who himself was chosen to be the Guest Santa of Honor at the National Mall Tree Lighting Ceremony in Washington DC. 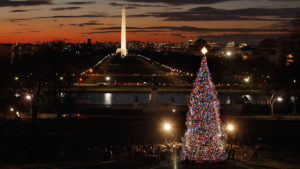 who thought Steve was the real deal. It was important for me to get the costume JUST RIGHT, as we all know that TV is shot in high-definition now and I didn’t want a thread out of place. I’m proud of my work, and I’m proud of Steve for wearing it so well. 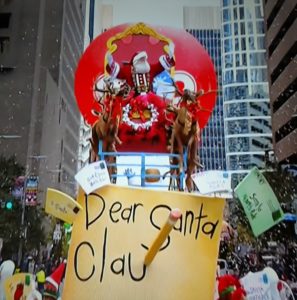 Also in the recent past, I was commissioned to design and create the costume for the official Santa Claus who was to be showcased in the annual H-E-B Thanksgiving Day Parade in Houston. Another fine man, Mel Wallace, was selected to be the wearer of said costume. While the scale of this event was more city-level than national, I am no less proud of my work. 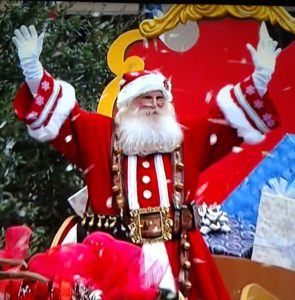 Now, both of these events were obviously designed for one-off events. But a few months back I received a request that brought a lot of delight – as well as a lot of hard work – into my life. I was sworn to secrecy for obvious reasons, because the company that hired me wanted to lovingly surprise its countless customers. But now that the job is done, I can tell you about it.

I was commissioned by a certain statewide large-scale convenience store/rest stop corporation to provide thirteen(!!) Santa Costumes for their area mascots! Now, unfortunately I can’t name any names, but I CAN say that, if you head out of Houston on pretty much any freeway, sooner or later you’ll come across one of these stores; they have plenty of billboards to tell you you’re getting close.

I can admit, it was no easy feat providing a costume that matched the exacting standards of both this magnificent (and unnamed) business and myself, and then repeating that process identically an additional dozen times. Not only was the look, quality, and consistency forefront in my mind, but also the comfort for the wearers of these costumes. I have to admit, my work with Toro helped me understand the trials and tribulations of men and women who have to wear heavy costumes for hours on end.

Despite the time and energy involved, it was SO worth it! I’m so proud and honored that such a community-based, statewide organization would trust me with providing the proper holiday look to represent it and its mascots. I hope… no, I KNOW that I’ve done them proud.

So… if you find yourself on a long-distance road trip this holiday season and stumble across a large, standalone convenience store/gas station, take a chance and pull in. And if you HAPPEN to see a mascot in a custom-made Santa costume, why not take a selfie with him/her and send it to me?