There’s a great – if not also trite – saying: “You can’t judge a book by its cover.”

I like to add, “True; but you CAN find out what it’ll cost.”

You’ve heard me from time to time refer to the dreaded subclass of client, the Bridezilla. It’s a quaint term designed to lump a myriad of ‘special-case’ customers into a single group. The defining characteristics of a bridezilla are things like being overly demanding, impossible to please, mercurial, and/or unwilling to work WITH the wedding expert in question. 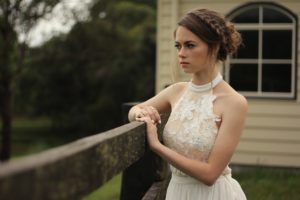 Yes, you’ve heard me talk about them in my blogs (the names have been changed to protect the innocent), and a Tale of a Bridezilla is always good for some extra views from people who enjoy Singing Seamstress Schadenfreude. But today I’d like to dig a little deeper – open the cover, as it were – and discuss a special topic: when you think she’s a bridezilla… but she’s not.

Sure: if it looks like a duck and quacks like a duck… but as I’ve grown my business and worked with all ilks of brides, brides-to-be, bridesmaids, and their families, I have to say I’ve developed a deeper understanding of some of them when they’re – how can one put this? – not at their best. Here are five main reasons I’ve discovered that someone who may SEEM like a bridezilla may NOT be.

Well, there you go: five very actual reasons why we should take a breath or two when dealing what seems to be a bridezilla. What are YOUR thoughts? I’d love to hear them in the comments!