Stories of My (Early) Successes

As this year rolls to a close, I thought I’d reminisce about days of old. I enjoyed some early successes as a fledgling Singing Seamstress, but not all of them – in fact, practically NONE of them – came easily. Here are some flashbacks that tend to bring a smile to my lips:

Putting the “Fab” in “Extra Fabric” 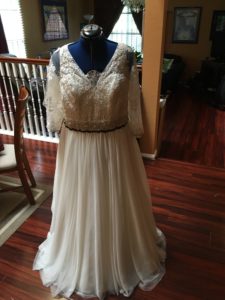 A bride-to-be and her mom came to a fitting appointment. Without judgment and speaking purely empirically, it was obvious that the bride was on the plus side. She had bought a dress and a matching bolero (a short jacket for those of you not quite fully fluent in the language of stitchery), but wanted to make some changes. We went to put the dress on and discovered that the zipper to the gown would not close.

In fact, not only would it not close, but the gap was fully four inches… and, yes, in this occasion size DOES matter. Apparently the gown boutique’s salesperson had clipped it where she could and then threw the bolero over the top to hide the fact from her that the dress was too small. Both bride and mother began to cry once I explained what was wrong. I was able to calm them down by explaining that this could still be fixed.

I am very grateful that the gown she bought had straps and that the skirt was a full ballroom style, so I had lots of 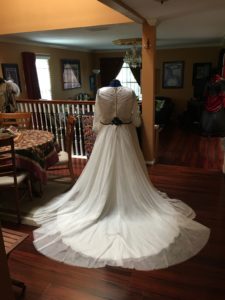 room to maneuver. Essentially what I had to do was add panels at the bodice side and then cover the seams up with the lace from the bolero body (as the bride had asked me to attach the bolero sleeves directly to the dress0. The upshot of which is that I distributed the lace so it looked like it had originally been crafted like that; no one could tell where the original designer ended and Heather began.

When the bride came in for her final fitting, she burst into tears again. But this time they were tears of joy and gratitude. The expression on her face made the extra work definitely worthwhile.

At Least They Didn’t Take Him on the Honeymoon

This time, a bride came in for alterations and requested modesty panels both in the front and the back; apparently the ceremony’s officiant doing the service wanted less skin showing. She brought me some lace and we played with the design until she was happy with the new design, finally approving it so I could get to work. When all was ready, she picked up the gown took it to show her officiant. 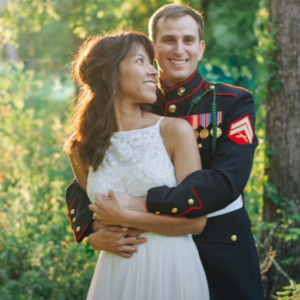 Not to put too delicate a point on it, but he pooped all over it. He requested a whole lot less skin showing. He was so adamant about it, apparently, that he even offered to pay for the work to be done. Once again, the bride and I put our heads together, and we eventually settled on what’s called a racer back formation, which is ironic because she could’ve picked up a dress that was originally in that configuration had she known. Unfortunately, apparently because of the time and expense involved in the additional work, the officiant reneged on his offer and said he was not going to pay for the alterations.

So now the bride and I were both stuck. She said she could pay me half of what she owed me on a credit card and then the difference with a post-dated check. At this point I was so mad at the officiant that I agreed to take a little of the weight off of her shoulders.

When she picked up the re-revised final gown, she mentioned something in passing about her father, and something in her tone and words gave me a sneaking suspicion that the officiant and her father were one in the same person. I never got pictures of the ceremony so I can’t confirm it; however, she DID text me saying that the officiant approved. And the check did clear.

Ironically, Making a Kilt is Harder

I received a frantic call late one Saturday evening from a bride asking if I could do a major alteration within a week’s time frame. She was desperate and asked around for someone who could rescue her, and my name came up. Through her near-hysteria, she explained that her other dress was a “disaster.” She had replaced the dress with a mis-sized alternate off the rack and needed alterations before she left for Scotland in seven days. Time was of the essence! The project could only take six days, max. I love a good challenge – especially when Scotland is involved – and had her come over to the studio that evening.

She showed me her previous pictures of her original gown. The dress she had first tried on was a larger floor sample, and so the neckline sat in a certain way that she liked. When she ordered the proper size for her measurements, however, the neckline didn’t look like that anymore. Her original seamstress assured her she could replicate the neckline, but in the end she couldn’t get it to look right at all.

The replacement dress she picked unfortunately had a six-inch lace border on the skirt that required to be moved. The only way to do so is by hand, and this is a time-consuming, intricate process. But the bride had inspired me, and I wouldn’t be daunted. 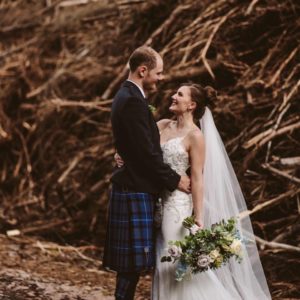 Six days? Hold my beer (or, more accurately, wine). I did it in two. I was able to complete the alterations the next day and when she picked them up she was extremely happy. She made her flight the ceremony was apparently a huge success, and I’m looking forward to her portraits in front of the family castle; here’s a castle-less taste in the meantime.