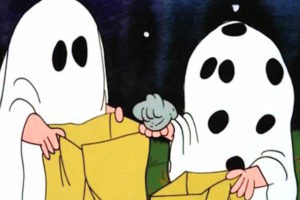 One of my earliest memories was catching a rebroadcast of the annual Halloween special, It’s the Great Pumpkin, Charlie Brown. The one scene that stuck with more than any other was good ol’ Charlie Brown himself trying to make a ghost costume out of a sheet and ending up with about a dozen eye holes. Needless to say, all he got was rocks in his candy basket.

Now, I’m not saying that witnessing that led me to become a seamstress, but I certainly carried the vision into my adulthood, and am bound and determined that any Halloween-type costume I do is a grand sight better than the holey sheet. (Although, if you’re bound and determined to go retro, I’ll be more than happy to discuss my nominal fee to repurpose a sheet as a replica of Charlie’s costume.)

I’ll be honest; I make a decent living from doing bridal gowns and Santa costumes for the most part. I don’t NEED to do ‘everyday’ costumes. But I certainly do enjoy making them when time allows. I recently had the joy of replicating one of Elton John’s flamboyant costumes for a client who wanted his own Rocketman-themed party, and it really felt good to stretch the creative muscles. And God help me whenever the Texas Renaissance Festival comes to town; I can create pirate and wench costumes in my sleep (and probably actually have done so). 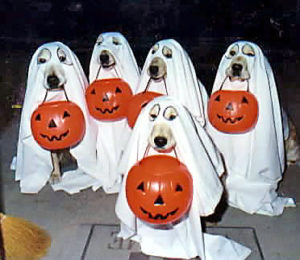 Gone are the days of the old five-and-dime-store purchases of a boxed Casper the Ghost costume that consisted of a flimsy white plastic onesie and a half-mask. Halloween today is a special day for children from age 1 to 101. And it seems that store-bought costumes – the only standbys of the latest superhero or cartoon character – aren’t enough for many, as no one wants to come to the same party in the same costume, not unlike two female movie stars wearing the same gown to the Academy Awards red carpet.

All this being said, I understand the need for an inexpensive, homemade costume when it comes to a pinch (even with all my experience, there’s been many an October 30th that’s rolled around that’s found me frantically digging through my closet for inspiration). As much as I’d love to be able to dedicate a month or two each year just crafting original costumes for clients, the autumn bridal calendar and the needs of the Santas worldwide don’t allow that to be in the cards. So, gentle readers, here are some ideas that might help you craft your own costume in the meantime:

Zombieland – this is one of the easiest costumes to make because there are no rules, and no two zombies are alike. Grab any clothes from your closet, the more ill-fitting the better. Squirt them with washable stage blood or – believe it or not – that concentrated fruit punch stuff you can squirt into a water bottle, which tends to wash out pretty easily. You can go full-on zombie makeup, or else just mess up your hair and snarl a lot.

Trading Places – If you’re a couple, why not go as each other? Even if one half of the couple is of a vastly different size from the other, the bad fit would add to the humor. As a last resort, hit the Goodwill store and buy something that LOOKS like the other person would wear.  You can even turn it into a game helping out the hubby with his makeup or the wife with her 5 o’clock shadow.

Cartoon Network – The nice thing about dressing up as a cartoon character is that the costume on the original character isn’t in reality, so ‘close enough’ will work. Grab jeans and a white shirt, tie a blue bandana around his neck, and bam! Fred from Scooby Doo. Or a green t-shirt and brown pants and – rut-ro! – you also have a Shaggy. Take a single-color large pillowcase, cut holes for head and arms, belt it, add a matching bow to your hair, and now you’re a PowerPuff Girl. White pants, blue polo shirt, red bandana, and a white bicycle helmet, and suddenly you’re Speed Racer. The possibilities are endless.

The Power of the Tee – If you don’t have the time or energy to craft an entire costume, get yourself a large white t-shirt, a thick black marker, and write your character on it. It can be a pun or joke, a bad superhero logo, whatever you like. Make the cheapness of it the joke. 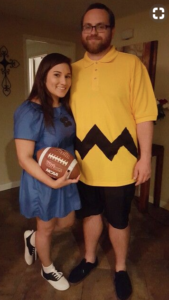 Good Grief – Speaking of t-shirts, grab yourself a yellow one and a roll of black duct tape, tape a zigzag onto the shirt, and you can be an instant Charlie Brown. Or, REALLY get into the spirit and cut a bunch of eye holes all over an old white sheet. But be prepared to get rocks.

Well, what do YOU think, gentle readers? What’s an inexpensive Halloween costume YOU’VE worn or have thought of?