Hello! Welcome to my new blog feature, “Tales from the Singing Seamstress” – a semi-regular peek into the wacky world of seamstressing. I thought I’d start off with a little holiday story.

We’ve all heard of the concept of the “Bridezilla” – heck, there was even a TV show about this special class of “lady” that goes all Jekyll/Hyde as the impending wedding day nears. Watching that television show was like watching a train wreck; however, there was a screen separating me from the horrors unfolding before me, and if it got too bad, I had a remote in my hand and 499 other channels to choose from.

Which left me a tad unprepared for my own version of every business owner’s nightmare of the enfant terrible client – my very own Santa-Zilla.

One fateful day, I received an order from a Santa for an embroidered velvet vest and matching knickers. He wanted zip fly and a back pocket, both of which additions I seem to have gotten lost in the translation. Which meant I mailed vest and knickers to him sans zipper and pocket, which in turn meant I received a very angry and nearly incomprehensible tirade via Facebook Messenger in the evening of the day he received them. (It’s important to remember the evening part of this, trust me.)

It took a while to sift through his hammered-out words and near-foreign syntax. Once I understood what he was on about, I immediately offered to – of course – fix the pants. The next morning, I received another Facebook Message from him – a more lucid message this time – pleasantly confirming he would return the knickers for their completion.

The moment Mr. Postman dropped them back off with me, you betcha I straightaway went about making the alterations. Whistling while I worked (or was it with visions of sugar plums dancing in my head? I forget), I put a patch pocket on the back and added a zipper closure in the front. Straining my own arm from patting myself on the back for my ability to placate a client, I shipped the pants back to my once-and-future Santa.

Imagine my surprice when, after he received them, I got “torn a new one” with yet another incomprehensible evening tirade. Apparently, upon reflection, he wanted a non-patch pocket; additionally, the zipper was supposedly puckering.

Thus continued the messaged back-and-forth, whereupon your Singing Seamstress sweetly offered to emergency-create another pair of pants catered to his new specifications and overnight them to him. The back-and-forth continued, until it finally dawned on me that I was conversing with someone who was drunk off his Santa ass. Apparently, my client started each and every evening off with a stiff drink or twelve, which explained the tenor of my evening messages from him and the contrary daytime moods.

Well, gentle readers, the Singing Seamstress did her best with what she had. Unfortunately for me, the velvets of his original vest and new knickers didn’t match – as they say, “Close, but no cigar.” (Side note: did you know that phrase comes from old carnival days where winning one of the games would win you a cigar, and not quite making it meant you went away empty-handed. Anyway, back to the story.)

To retaliate, my own personal Bad Santa tore the waistband and the pockets, claimed it was my handiwork, and demanded his money back. How do I know that he tore them? I made him send me back the pants. As you can surmise, my check to him was most definitely NOT in the mail.

Now, here’s the punchline: two weeks later, I get a lucid daytime message from him; quite soberly (literally and figuratively), he wanted me to make him some shirts.

So, I did what any self-respecting business owner would do: I squared my shoulders, girded my loins (I don’t even know what that means, but I did it), proudly proclaimed that the customer is always right, and created for him a dozen awesome shirts and didn’t even charge him.

After getting over my shock, I politely, professionally and firmly fired his drunk ass as a client. 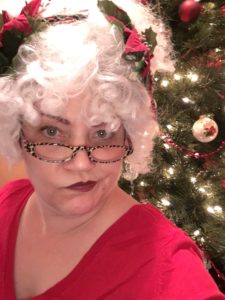 It’s not nice to mess with MRS. Claus, you see…