I can’t believe another year has come and is nearly gone. We’re facing the return of the Roaring ‘20s, and I for one can’t be more excited at what’s around the corner for me, personally and professionally.

It cannot be denied that 2019 capped off a decade of highs and a couple of lows, but that’s par for the course for a small business owner, especially one whose livelihood depends on customer satisfaction even when it’s a fact that some customers are never satisfied. However, it equally can’t be denied that no one ever held a gun to my entrepreneurial head. I do what I do for love. Love and – you know – the occasional paycheck.

So, without too much further ado, allow me to share with you some of the highlights and lowlights of 2019: 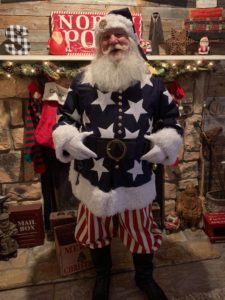 Uncle Santa Wants You! – It may seem small in the grand scheme of things, but I was so proud to create my first Civil War Santa costume. A little history: in 1863, President Lincoln thought it would be a good idea to create a Santa who had the best interests of the Union at heart – if Santa is for us, who can be against us, right? – and

that year cartoonist Thomas Nast came up with a visual. Bedecked in red, white, and blue stars and stripes, this figure inspired countless soldiers during the holiday season to end the war in their favor. Now, we’ve all heard of Civil War enactors, but this was the first time I’d ever encountered a Civil War SANTA enactor. Which made me very glad to be a part of history!

Family (Christmas) Tree – In March, I had the honor of attending the annual Santa Family Reunion in Gatlinburg, Tennessee. Hundreds of Santas and Mrs.

Clauses hit the Gatlinburg Convention Center and streets for a yearly convention that fills the town with love and laughter. It was more than me just being there as a vendor; I found a whole new family and can’t wait to go back in ’20!

You Can’t Make Everyone Happy All of the Time – This was an admittedly low point in the year. On two occasions, I received word of unhappy customers. Now, I know that’s part and parcel of doing business, but I eventually realized that there exists in this world people who will just never be satisfied. Maybe they’re professional complainers. Maybe they have hopped on the train of thought that if they complain loudly enough they’ll get their goods/services/meals/projects at a steeply discounted rate or even free. I have to thank my business coach for ensuring that I had my terms and conditions of service prominently displayed and also made as part of my contracts with customers. As a result, even the Better Business Bureau agreed with my side and dropped the claims against me. But I have to admit it still stung and made me seriously consider my continuation as the Singing Seamstress.

Tying the Knot – And this is the ‘yang’ to the previous paragraph’s ‘yin’ – For the second year in a row, I was

named to Knot’s “Best of Weddings.” This is an honor that no one’s personal agenda can take away from me. With more than a hundred 5-star ratings on The Knot – inarguably the Internet’s premier central hub for weddings and brides – I was galvanized and inspired to keep up the hard work and do everything in my power to earn a THIRD award in a row in 2020. I’ll keep you posted!

The Faces Behind the Masks – If you’ve been keeping up with my blog over the past few months, you’ll know I had the joy of signing contracts with two amazing business entities to provide costumes for their mascots. The Houston Texans’ mascot – Toro the bull – has worn several of my creations (meaning that when he’s televised on a game, I’ve got MILLIONS of people checking out my work!) and I even got to help brighten the life of his bride. The other mascot I’m not at liberty to discuss (corporate rules), but if you had found yourself on the road and pulling into a particular large convenience store because you were craving some kind of beaver-type snack, you might have seen one of thirteen costumes I created for this company. Nameless or not, it was an honor and a pleasure (and a lot of hard work on limited time!) to craft these costumes. 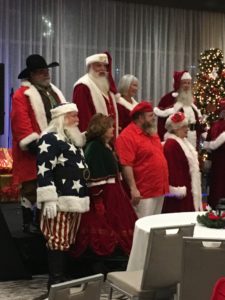 Lone Star Roundup – Grapevine, Texas was one of my destinations of choice this year when I attended theLone Star Roundup, an annual event that includes a fashion show; here are several of my costumes being featured in the show. If you haven’t heard of Lone Star Santas, you need to check them out here!

Reaching Out – I think, in closing, that the biggest highlight of 2019 was reaching so many of you. Your word of mouth has done wonders for my business, and I’ve loved posting blogs and memes and photos and observations and jokes and everything else I can think of to entertain, inform, and inspire you. And your responses have inspired me. From the bottom of my heart, I thank you for your support and patronage, and I’m SO looking forward to stepping into the Roaring ‘20s with you.